Our Next Free Presentation
​Tuesday, February 25, 6:30pm at the Hostel
"Upper West Side Catholics: the History of Ascension Church on West 107th Street"
presented by Monsignor Thomas J. Shelley 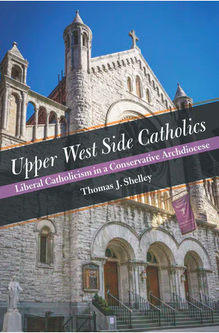 Monsignor Shelley, author of the recently published book Upper West Side Catholics: Liberal Catholicism in a Conservative Archdiocese  and professor emeritus of Fordham, will tell the story of this well-known upper west side church. He sees Ascension as a microcosm of the history of the Catholic Church in the city, a flourishing multi-ethnic bilingual parish and a vital part of the Bloomingdale neighborhood. The church, which began as a small German parish in 1858 and then  developed into a large Irish parish, suffered a precipitous decline from the 60s to the 80s, but was rescued from near-extinction by an influx of Puerto Rican and Dominican Catholics.
Shelley considers Ascension to be a showcase of the success of urban ethnic Catholicism. His book includes more information on the Lion Brewery than any other book about the Upper West Side.  The Brewery stood just a few blocks from the church from the mid 1800s to 1944, spanning a huge piece of land that stretched from W107th  to W109th Streets, Columbus Avenue to CPW.

Monsignor Shelley has written several books including The Bicentennial History of the Archdiocese of New York and .
Fordham, A History of the Jesuit University of New York: 1841-2003, which was described as “a remarkable achievement” by a Gotham Center for New York City reviewer. ​