BNHG BOOKSHELF
Books  BNHG members are reading and discussing
Recommended by Joan Paylo, special advisor to the BNHG
Sanctuary: Being Christian in the Wake of Trump by Heidi Newmark 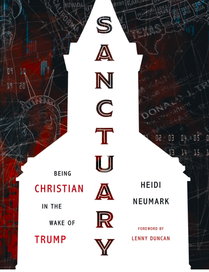 Sanctuary is a sort of memoir of Trinity Lutheran Church during Heidi’s years since her arrival on West 100th Street in 2003. She fills the book with touching vignettes of people she has met here on the Upper West Side, in Latin America, at the Mexican border and throughout her life. She talks about the German congregation that built Trinity, the gentrification battles,  the removal of the historic windows, the neighborhood historical records in the library, today’s diverse bi-lingual congregation, recent immigrant families’ struggles, the SWEAT Chinese and Latino workers’ demonstrations and celebrations that were planned in Trinity’s space, super storm Sandy, the holiday dinners that feed 1,000, the stream that runs through the foundation of the church, the invasion of mice that stemmed from excavation to build “Columbus Square,” and especially the shelter for LGBTQ+ youth in the church basement, which, as you probably know, is one of only a handful in the five boroughs.  Although she doesn't give a "commandment" in the book, my immediate takeaway was that we should observe each moment and person we encounter and treasure it. Such empathy and compassion were what helped her create this book.
Recommended by Marjorie Cohen, BNHG planning committee member
Reclaimed Wood: A Field Guide by Alan Solomon and Klaas Armster with photographs by Michel Arnaud ​ 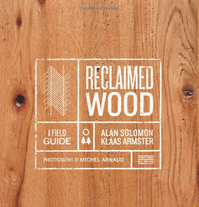 I’m betting that​ ​the recently published book, ​Reclaimed Wood : A Field Guide will surprise you. And I mean “surprise you” in a good way. The authors, Alan Solomon and Klaas Armster are passionate about wood, wood that has been salvaged from old buildings and then used to create new homes, staircases, boardwalks (like the one in Coney Island) and more. By the time you finish the book, you’ll understand their passion. As you thumb through its pages, you’ll be wowed at first by the beautiful photographs of what has been done with wood that has been rescued from the junkyard.
These lush photographs are paired with fascinating text--about the history of lumber and lumbering in this country, about our virgin forests, about what kind of woods were used in the earliest buildings in the country and how reclaimed wood has been come to be used in 21st century projects.
Solomon and Armster explain what reclaimed wood means to them: “For us, the term evokes both a sense of loss--the ancient forests are now largely gone--and a sense of preservation and renewal. The forests reemerge through the demolition process, bearing the marks and color of age and wear and with a story to tell.”
The authors’ enthusiasm for their subject is palpable and once you have finished the book, you will understand exactly why that is.

New York Rising:An Illustrated History from the Durst Collection  by Thomas Mellins.  Seymour Durst, son of the founder of one of New York City’s most prominent family-owned real estate firms, was a passionate collector of all things New York. Before his death in 1995, he amassed almost 35,000 pieces of New York history—books, prints, maps, photographs, and postcards. In New York Rising ten scholars chose items from the Durst collection and occasionally images from other sources to tell the story of New York’s development over the past 400 years.   New York Rising is a companionable guide to how the city got from there to here, from the image of a 1628 print of Fort Amsterdam, with its tiny houses clustered just outside the fort, to the final image in the book, a contemporary photo of Times Square.

Waterfront Manhattan: From Henry Hudson to the High Line (2018) Dr. Kurt Schlichting tells the storied past of the Manhattan waterfront and the struggle between public and private control of the this most priceless asset. Jameson W. Doig, author of Empire on the Hudson,  praised the book as succeeding "admirably in describing the evolution of Manhattan’s waterfront through the past several centuries--so far as I know there is no published work of such scope and richness.” ​​
Recommended by Pam Tice, BNHG planning committee member

Spy Sites of New York City
H. Keith Melton and Robert Wallace
Georgetown University Press, 2020
A companion volume to another on spy sites in Washington, DC, this glossy guide is full of photos of the sites, arranged by historical period, covering the Revolutionary War and the Civil War, to the rise of communism and fascism in the 20th century to Russian sleeper agents in the twenty-first century. The 200+ sites are described and often photographed. Better still, there is a map grouping sites, so I checked out the Upper West Side to see if our Bloomingdale neighborhood had sheltered any spies.
There was Sidney Reilly, at 260 Riverside Drive who spied against the then-new Bolshevik government, trying to save the Romanovs and assassinate Lenin. Unfortunately, he was lured back to Russia where he was executed in 1925.
Another spy was Vasily Zarubin who lived at 2788 Broadway in apartment 4A, from 1941 to 1944. He was a senior officer in the NKVD, the forerunner of the KGB. Nearby was the Soviet School at 349 West 86th Street, also known as the Russian Aid Society.
Finally, there was Valentin Gubitchev who lived at 64 West 108 Street. He came to work at the new United Nations in 1946. His accomplishment was to recruit Judith Coplon of Brooklyn who became the first American to be tried and convicted of spying for the Soviet Union after World War II, although the verdict was later invalidated.

​Victory City: A History of New York and New Yorkers by John Strausbaugh is a rich and  readable New York City history of the World War II years, with nearly half of the book covering the pre-War years and the cast of characters who took the stage by the time of the December 7, 1941 attack on Pearl Harbor.  Strausbaugh focuses on the people who made our history, from FDR and LaGuardia, to the role Vincent Astor played in developing spy networks, to the Manhattan Project, and the saboteurs who infiltrated the city regularly.  He includes minor characters, from bobby-soxers and zoot-suiters, to gangsters and conscientious objectors, and just regular folks who stepped into famous photographs.
​Recommended by ​Win Armstrong, BNHG planning committee member​

We Are Staying: Eighty Years in the Life of a Family, a Store, and a Neighborhood  Jen Rubin "outlines the tale of a successful family, storefront business with panache, and it includes the New York story of beginning, striving and belonging, and of heart, soul, and compassion for customers and workers. Just be sure you don't miss it."
--Gail A Brewer, Manhattan Borough President

​Activist New York:  A History of People, Protest and Politics
​Steven H Jaffe traces the struggles for religious and press freedom in the Colonial and Revolutionary periods 1624-1783 on through Occupy Wall Street in 2011.  The author Steven Jaffe is a curator of the Activism Exhibit at the Museum of the City of New York.
According to Eric Foner's forward, "Every generation of New Yorkers has witnessed the emergence of some kind of collective popular activism.  Their movements have helped to make New York, and America, a freer, more equal society."
Recommended by John Gorham, BNHG planning committee member 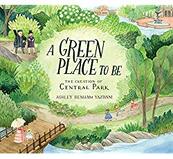 ​ A Green Place to Be: The Creation of Central Park (2019)
​Ashley Benham Yazdani ‘s A Green Place to Be: The Creation of Central Park is a charming introduction for young people, readers and non-readers, to the history of Central Park, and a wonderful re-introduction for some of us older readers who may not have our history up to date.  (In the back of the book there is additional historical information, elaborating on Seneca Village, for example.)  Fabulously illustrated, the book will reward repeated viewing with its details of period dress and pasttimes, such as winter skating and summer concerts in the park.  After reading, I immediately sent a copy to my 6 and 8 year-old grandchildren in Minneapolis to remind them of their visits to the park and, of course,  to encourage another visit. 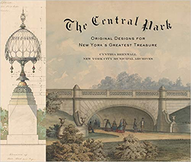 The Central Park: Original Designs for New York's Greatest Treasure (2019)
​Comic books once fed the imagination of  their fans with ads featuring  “x-ray specs” and “secret decoder rings.”  More recently, in The Central Park Cynthia Brenwall has provided fans of Central Park with a literary form of   specs and  rings.  Brenwall, conservator and art historian, is part of a project at the New York Municipal Archives to conserve and restore the original plans and drawings for the park. A product of this research,  her richly illustrated book covers more than sixty-five design projects in spatial and historical context.  A walk through the park will never be the same.  Learn to see the familiar in a new way and  understand the unfamiliar without wearing awkward glasses and  bulky rings. ​
Recommended by Jim Mackin, BNHG planning committee member

Upper West Side Catholics: Liberal Catholicism in a Conservative Archdiocese  By Thomas J. Shelley
What ethnicities. It’s hard not to enjoy a book that attends to so much local detail, and this one does just that, a pleasant surprise to read a fairly comprehensive history of a church on West 107th Street and discover much more about the Bloomingdale neighborhood. The nearby Lion Brewery, which has always escaped our research if not our attention, is covered in Shelley’s book. So too are the dynamics of the New York Archdiocese and how a local church fits into their scheme of things. We know the Upper West Side to be a force of progressive inclinations, and Upper West Side Catholics   with the dynamics of Irish and German and changing populations does just that.

​Ned Harrigan from Corlear's Hook to Herald Square(1980) by Richard Moody is a biography of half the great vaudeville team of Harrigan and Hart, made more famous by the George M. Cohan song “H - A - double R I, G A N Spells Harrigan”. He lived on West 102nd Street and the bio covers quite a bit of early musical theater history.

​Before Harlem: The Black Experience in New York City before World War I (2006) by Marcy S. Sachs. This book leads up to the Harlem Renaissance period with the history of where African-Americans lived in Manhattan at the turn of the last century. The Tenderloin district and San Juan Hill in the West 60s figure prominently, but most of the attention is given to the likes of Phillip Payton, J. Rosamond and James Weldon Johnson. This book is essential to understanding how Harlem came to be.

​A good companion book to the above is Race and Real Estate: Conflict and Cooperation in Harlem, 1890-1920 (2015) by Kevin McGruder, which covers the intricacies of how African-Americans populated Harlem. The nasty side of the story is the higher rents extracted as a by-product of racism. Good street and building detail makes for an absorbing read and an urge to walk Harlem’s streets. 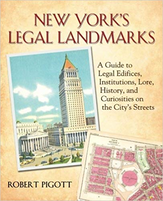 Although I read it a few years ago, I’ve had occasion to revisit one of my favorite New York City books: New York's Legal Landmarks: A Guide to Legal Edifices, Institutions, Lore, History and Curiosities on the City’s Streets (second edition, 2018) by Robert Pigott. If you have reported for jury service downtown, you have only scratched the surface in seeing the city’s vast judicial infrastructure. This book is delightful in its detail and will challenge and educate you.